Major events of the month 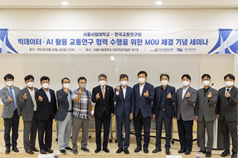 The Korea transport institute(chairman: Oh Jae-Hak) entered into an Agreement with University of Seoul(president: Seo Soon-Tak) on the establishment of the cooperation system for efficient operation and future mobility research at the Centennial Hall of the University of Seoul on August 20(Friday). This Agreement contains various cooperation plans, including those for establishment of big data and traffic operation strategies, joint research for future mobility, etc., joint utilization of education and research resources such as data and system, and operation of on-site practical programs for undergraduates(graduates). On the same day, a ceremony was held to explore the matters related to the details of the Agreement. 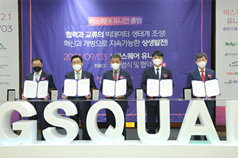 The Korea Transport Institute(Chairman: Oh Jae-Hak) signed an Agreement with the Korea Forestry Promotion Institute(Chairman:Lee Gang-Oh), the Korea Water Resources Corporation(President:Park Jae-Hyeon), the Korea Data Exchange(KDX)(President: Park Jae-Hyeong), and the Korea Agro-Fisheries Trade Corporation (President: Kim Chun-Jin) on data-related cooperation at ICC Hotel in Daejeon on September 3(Friday), launching the 'Big Square Union'. The organizations participating in the Agreement expressed anticipation for joint actions with the Big Square across many fields, such as derivation of the ideas related to the Fourth Industrial Revolution by tapping into abundant data of public and private sectors, proactive implementation of government-led projects, resolution of social issues based on big data, along with the expectations that the stable inter-platform data cooperation networks, built under this Agreement for transportation, forest, agricultural foods, environment, distribution, and consumption, would be instrumental in creating unprecedented insights and values. 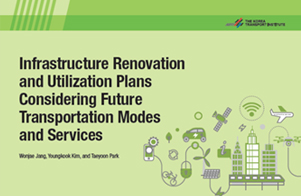 Through the advancement of autonomous driving technology and various demonstrations, the "Autonomous Driving Era" that operates without human drivers is gradually becoming a reality. In addition, new types of transportation, such as tubular high-speed rail, urban airways, and personal mobility, etc., are gradually

Click here to receive traffic research trends and news about researchers through KakaoTalk.