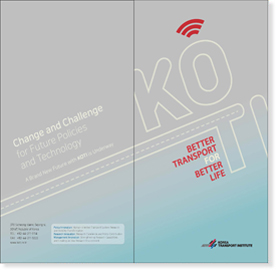 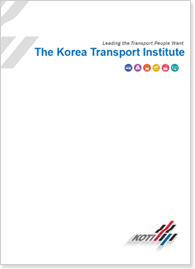 Roads provide connections between people, the past and present, and a bright future.
Successful transport provides connections and meetings, drives development and growth, and undergoes evolution and expansion.
The story of the path Korea has followed is just beginning
As a result of the Korean War, Korea was one of the poorest nations in the world.
Despite this, the nation has grown into a great economic power.
So what was the driving force of this miraculous development?
This dramatic change was the result of recognizing that transport infrastructure is the most important factor in national development and investing in it.
Korea has traveled to remarkable economic growth by focusing on construction of roads, railways, and ports in the early stages of rebuilding the country.
The Korea Transport Institute, known as KOTI, has taken the lead in planning transport infrastructure and developing transport technologies which are necessary and crucial for national economic development.
The past 30 years was the time for creating roads. It not only enabled people and goods to freely move, but also raised the national economy. It improved the speed and efficiency of development and had a profound effect on a number of systems.
In our institute, over 300 transport experts are carrying out domestic and international research related to various fields.
Their hard work can be seen in over 3,000 completed cases of research. Their dedication has become the foundation of establishing national transport policies and provides direction on how to further improve transport for the future.
Our research has fueled Korea's phenomenal economic development and we desire to share this knowledge to encourage development all over the world.