Why do people in Korea drive on the right? 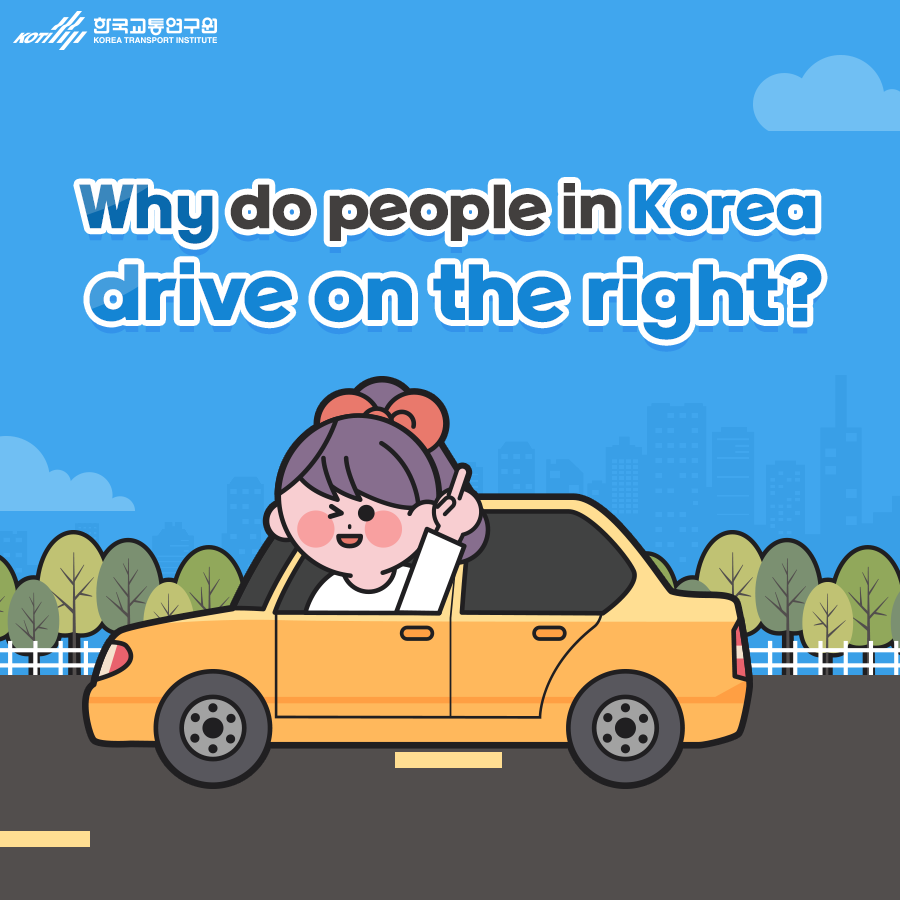 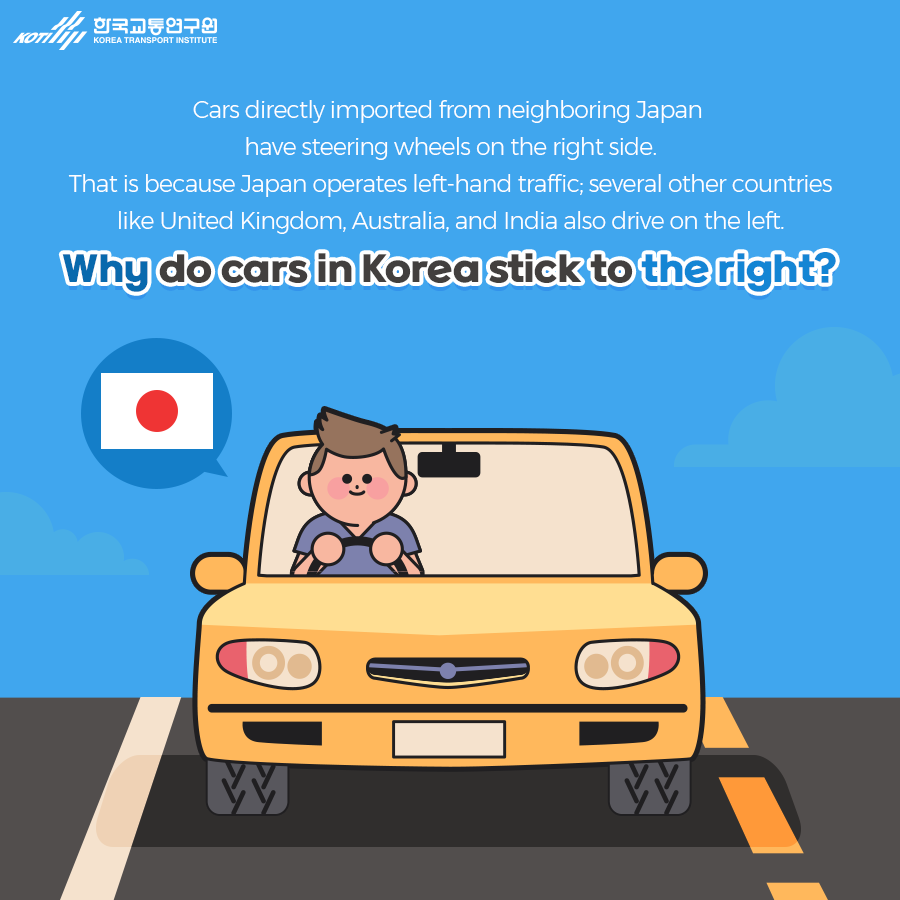 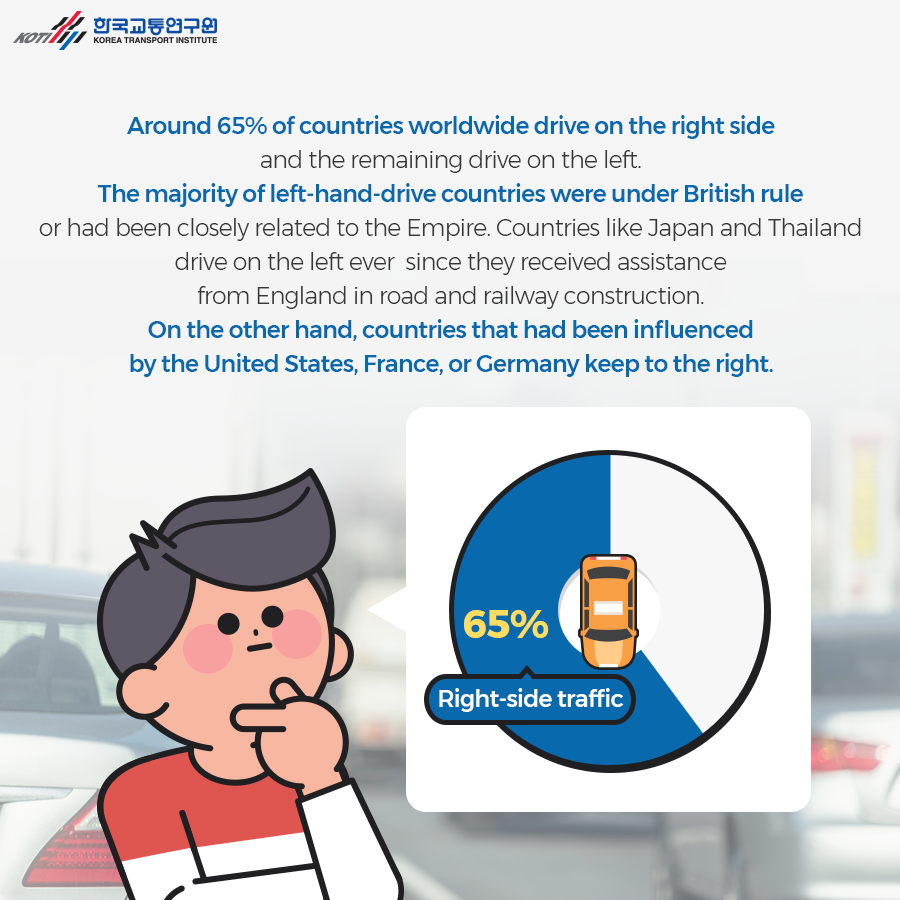 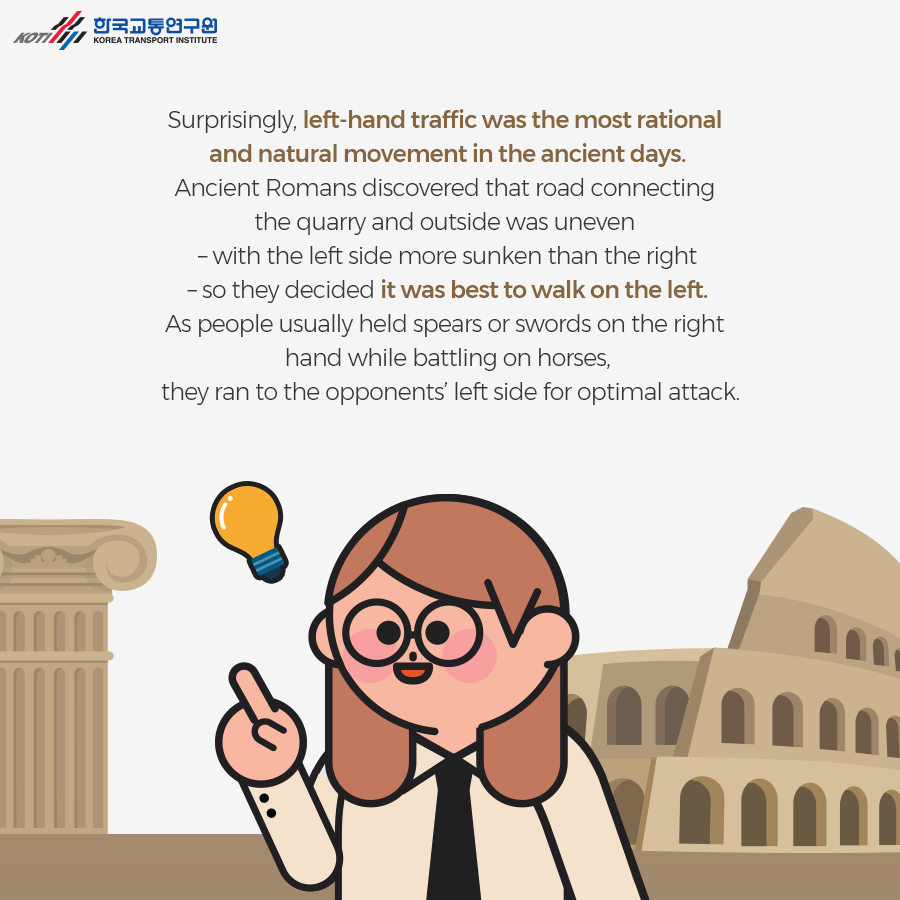 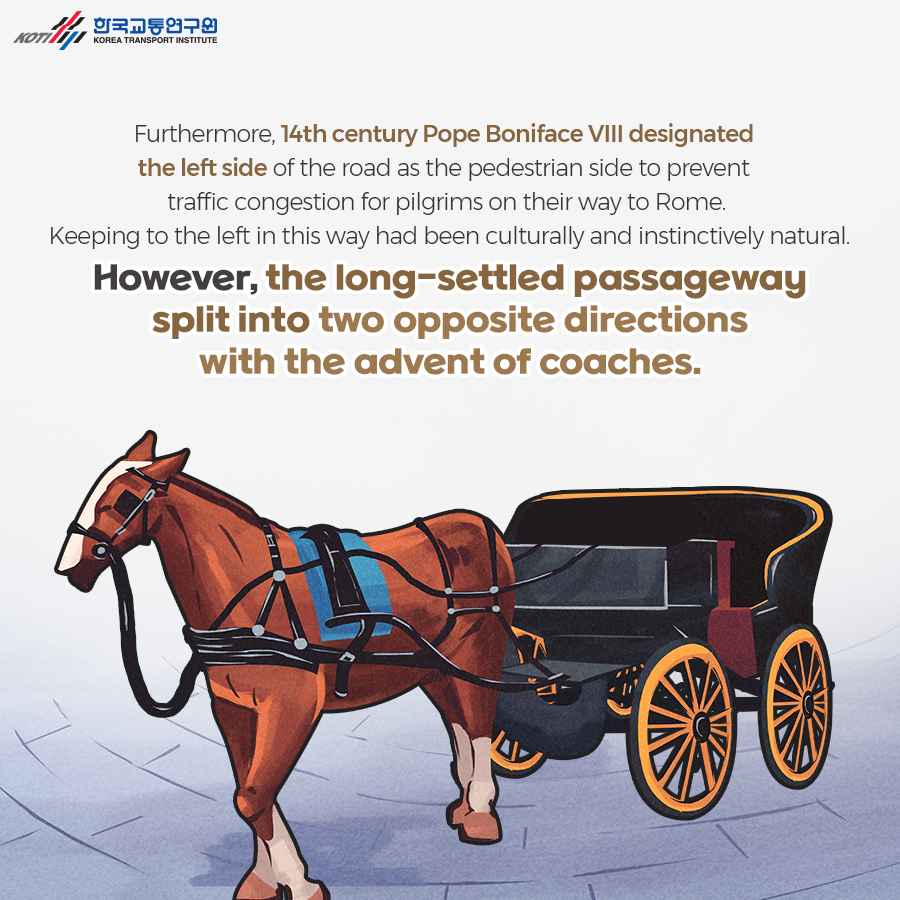 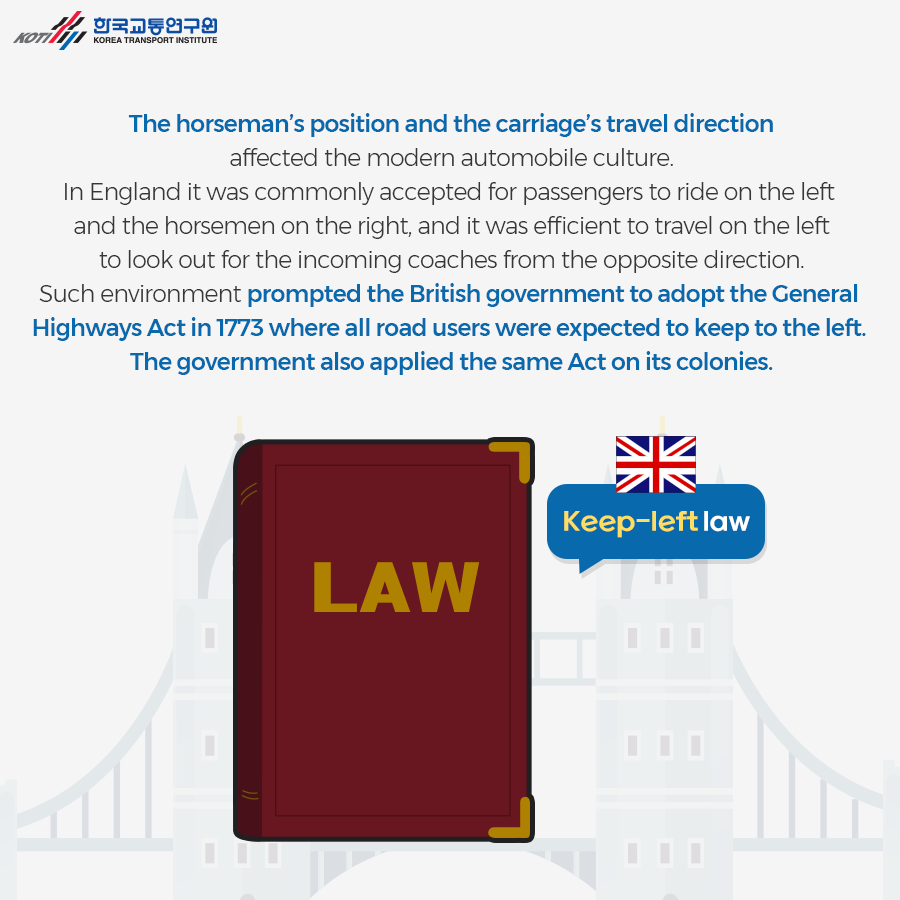 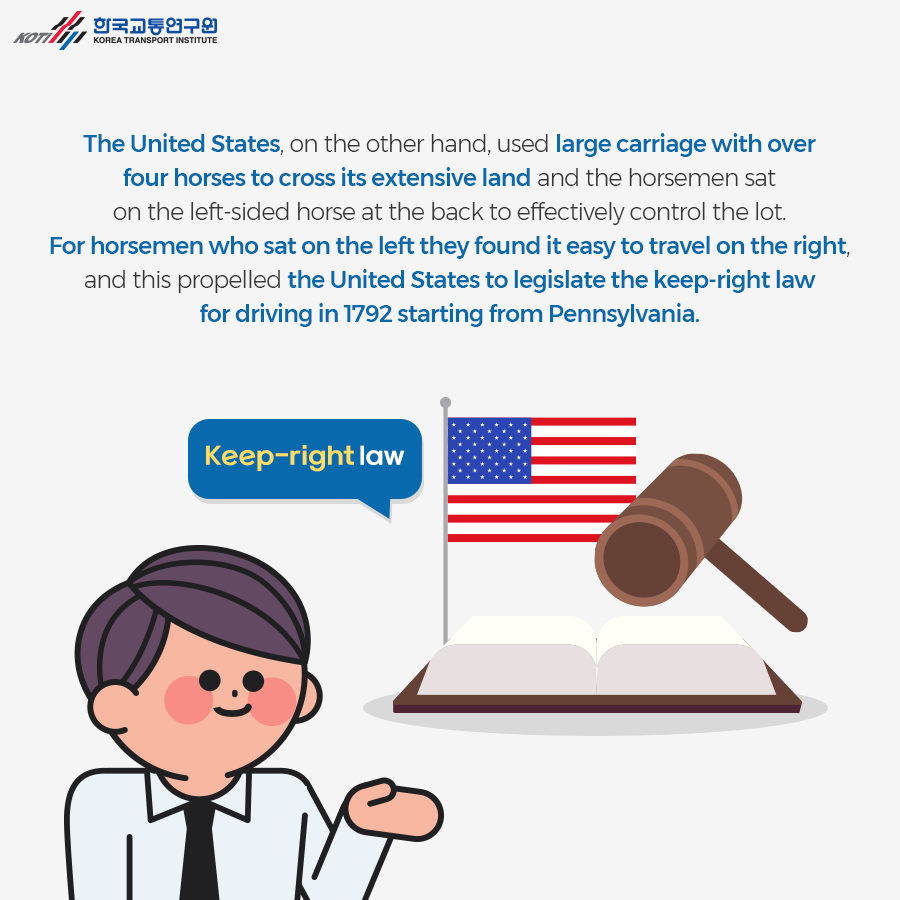 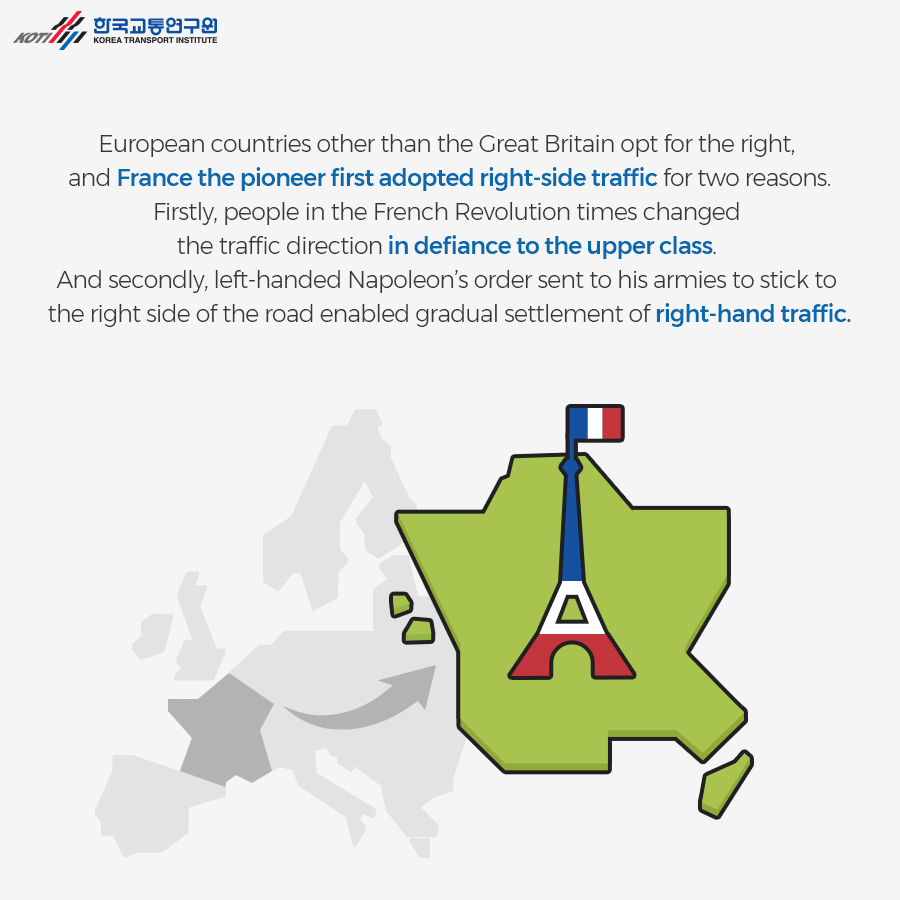 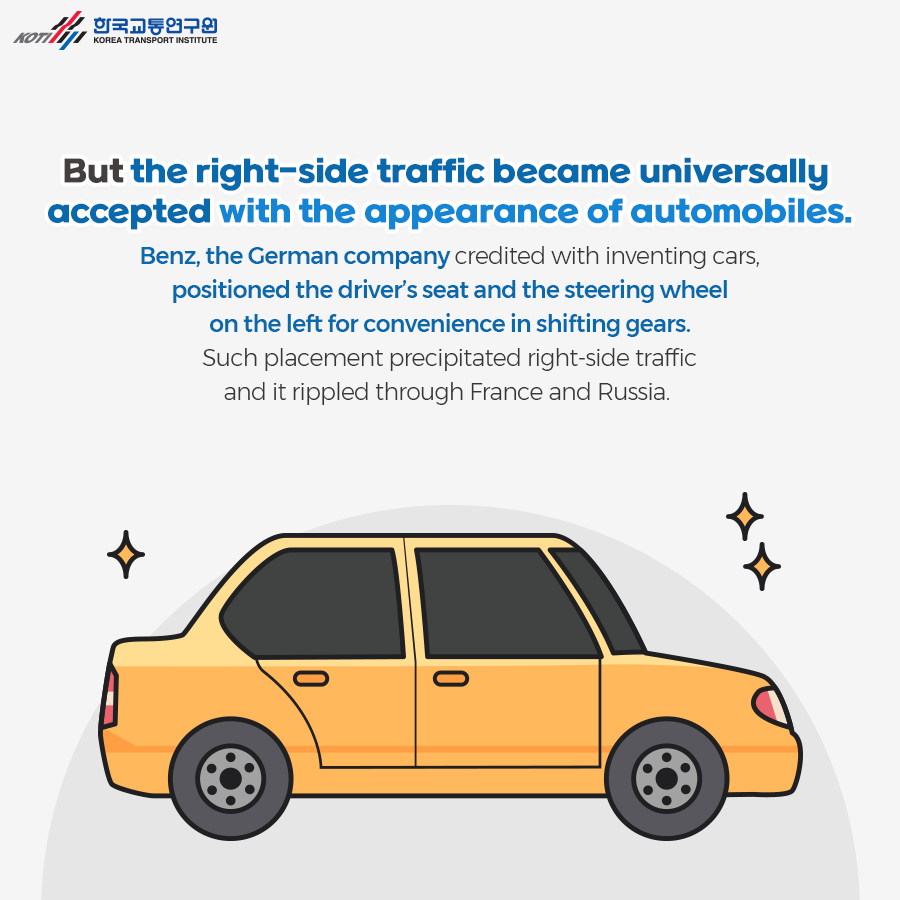 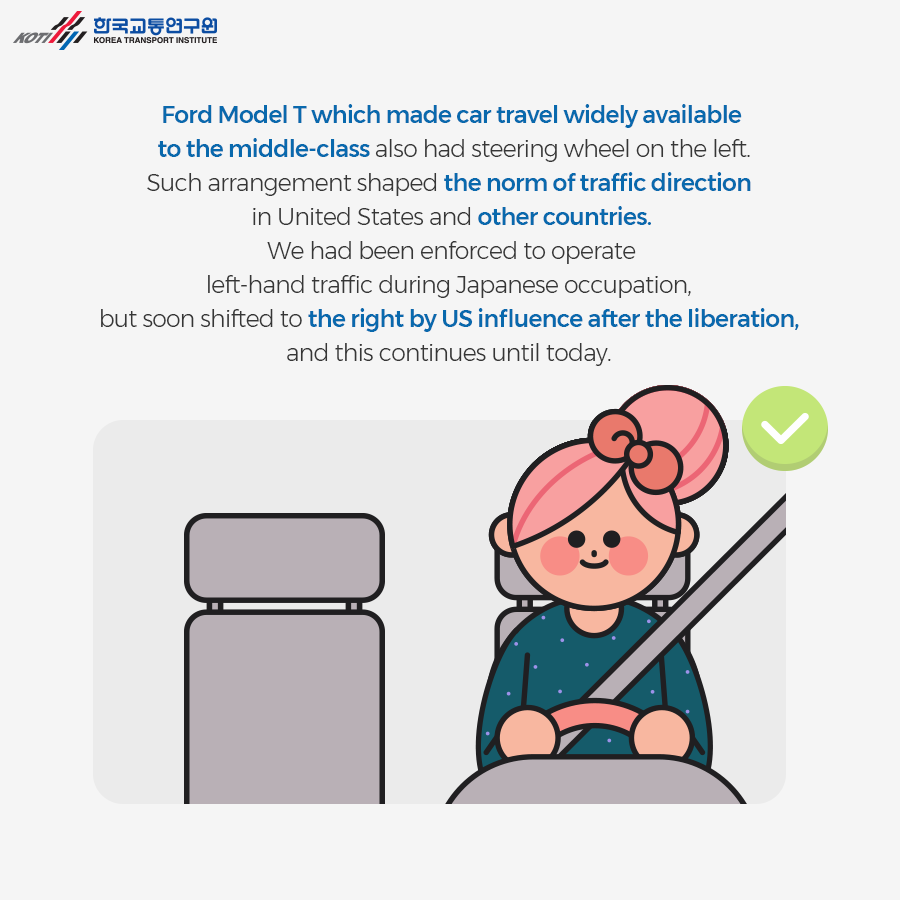 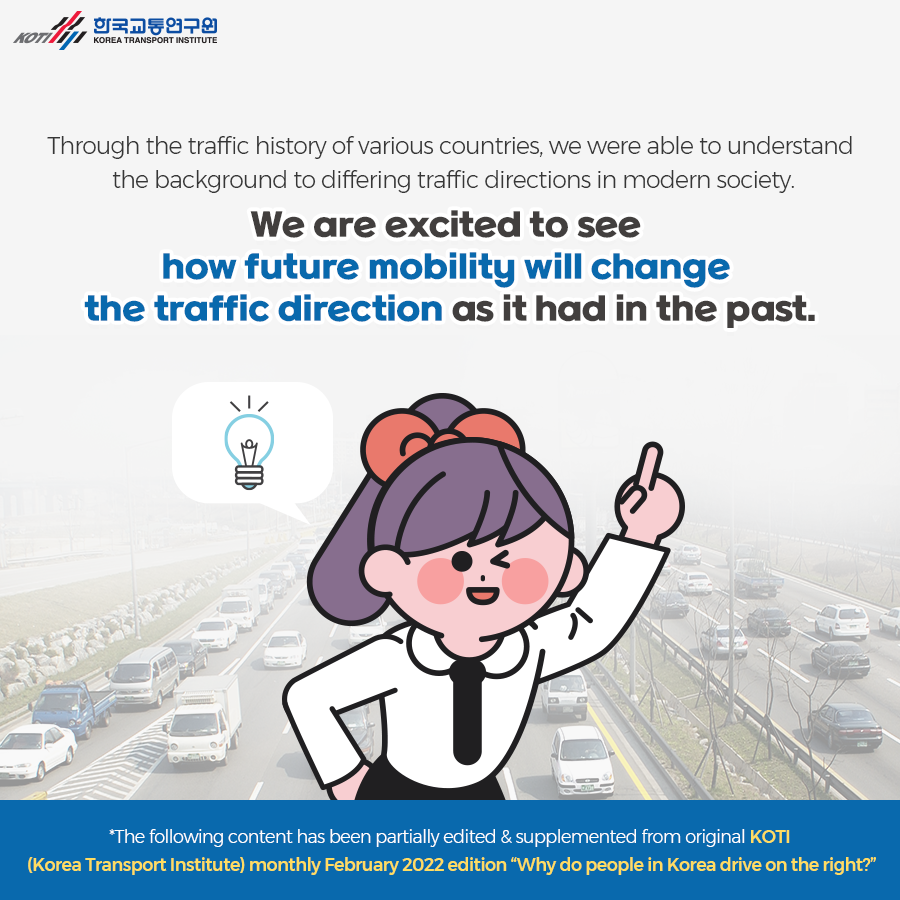 # Cars directly imported from neighboring Japan have steering wheels on the right side. That is because Japan operates left-hand traffic; several other countries like United Kingdom, Australia, and India also drive on the left. Why do cars in Korea stick to the right?


# Around 65% of countries worldwide drive on the right side and the remaining drive on the left. The majority of left-hand-drive countries were under British rule or had been closely related to the Empire. Countries like Japan and Thailand drive on the left ever since they received assistance from England in road and railway construction. On the other hand, countries that had been influenced by the United States, France, or Germany keep to the right.


# Surprisingly, left-hand traffic was the most rational and natural movement in the ancient days. Ancient Romans discovered that road connecting the quarry and outside was uneven – with the left side more sunken than the right – so they decided it was best to walk on the left. As people usually held spears or swords on the right hand while battling on horses, they ran to the opponents’ left side for optimal attack.


# Furthermore, 14th century Pope Boniface VIII designated the left side of the road as the pedestrian side to prevent traffic congestion for pilgrims on their way to Rome. Keeping to the left in this way had been culturally and instinctively natural. However, the long-settled passageway split into two opposite directions with the advent of coaches.


# The horseman’s position and the carriage’s travel direction affected the modern automobile culture. In England it was commonly accepted for passengers to ride on the left and the horsemen on the right, and it was efficient to travel on the left to look out for the incoming coaches from the opposite direction. Such environment prompted the British government to adopt the General Highways Act in 1773 where all road users were expected to keep to the left. The government also applied the same Act on its colonies.


# The United States, on the other hand, used large carriage with over four horses to cross its extensive land and the horsemen sat on the left-sided horse at the back to effectively control the lot. For horsemen who sat on the left they found it easy to travel on the right, and this propelled the United States to legislate the keep-right law for driving in 1792 starting from Pennsylvania.


# European countries other than the Great Britain opt for the right, and France the pioneer first adopted right-side traffic for two reasons.Firstly, people in the French Revolution times changed the traffic direction in defiance to the upper class. And secondly, left-handed Napoleon’s order sent to his armies to stick to the right side of the road enabled gradual settlement of right-hand traffic.


# But the right-side traffic became universally accepted with the appearance of automobiles. Benz, the German company credited with inventing cars, positioned the driver’s seat and the steering wheel on the left for convenience in shifting gears. Such placement precipitated right-side traffic and it rippled through France and Russia.


# Ford Model T which made car travel widely available to the middle-class also had steering wheel on the left. Such arrangement shaped the norm of traffic direction in United States and other countries.

We had been enforced to operate left-hand traffic during Japanese occupation, but soon shifted to the right by US influence after the liberation, and this continues until today.


*The following content has been partially edited & supplemented from original KOTI (Korea Transport Institute) monthly February 2022 edition “Why do people in Korea drive on the right?”