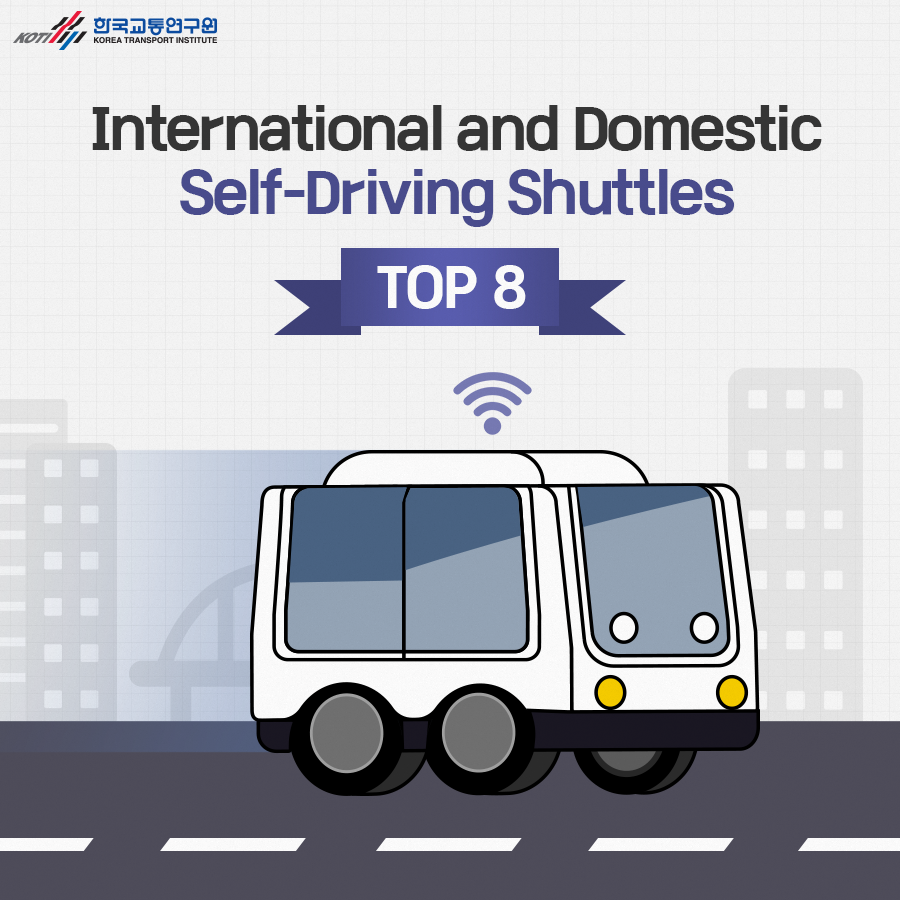 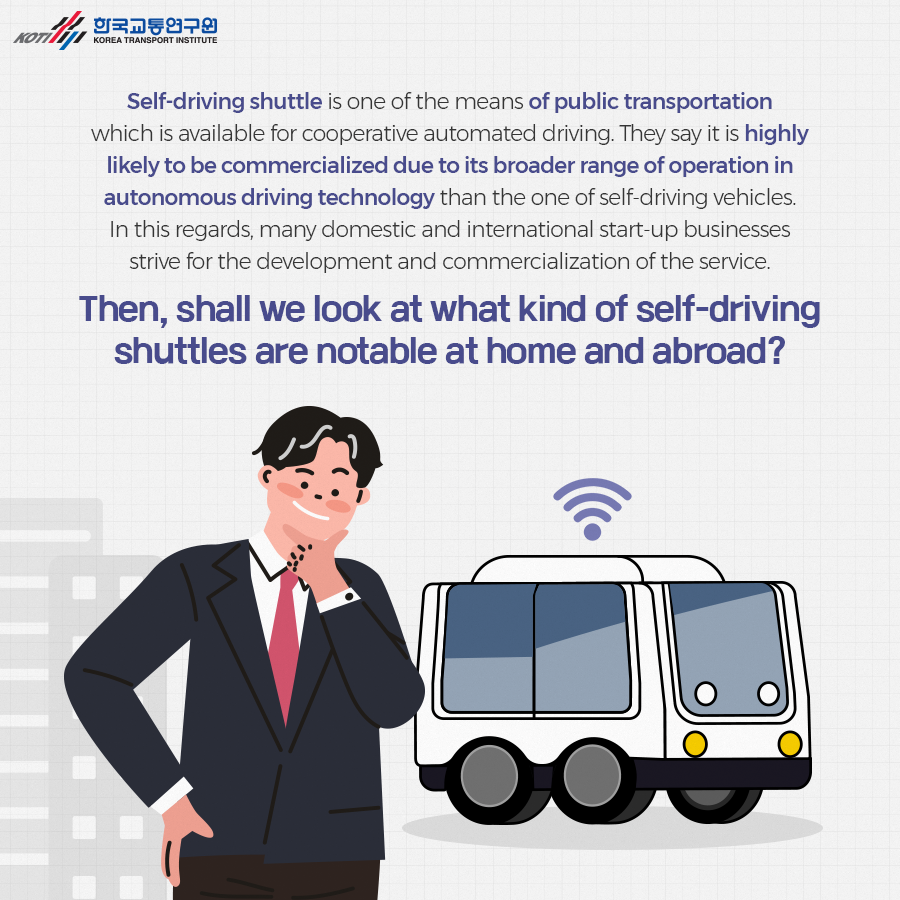 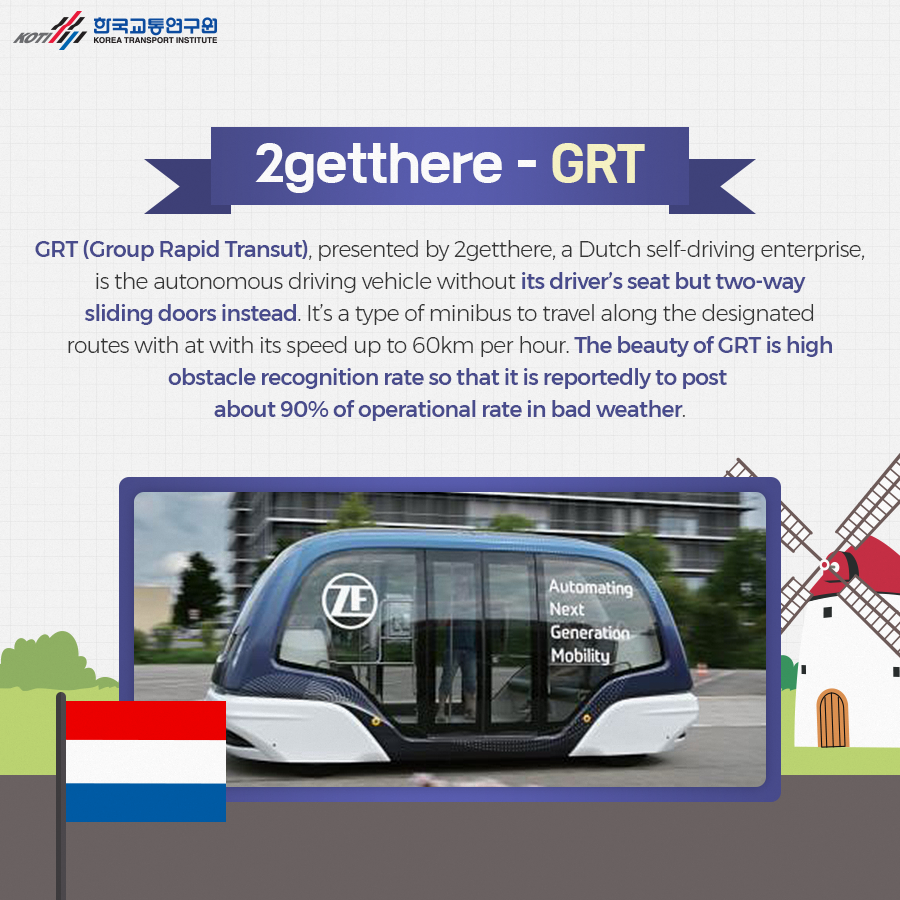 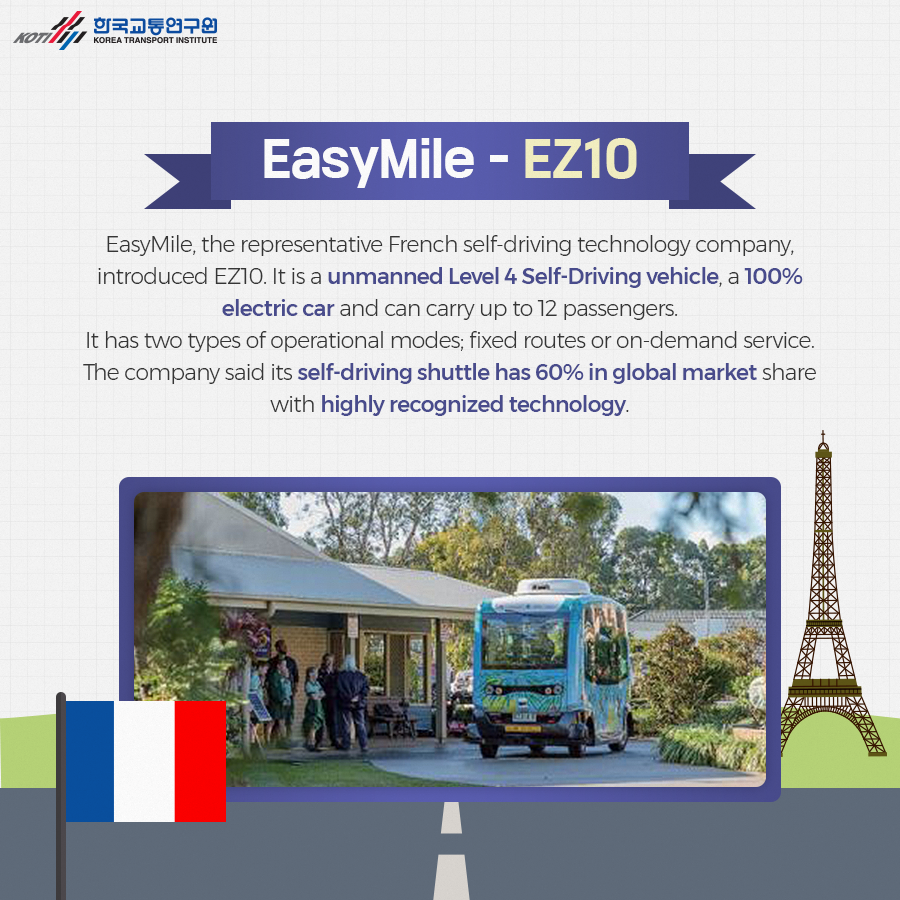 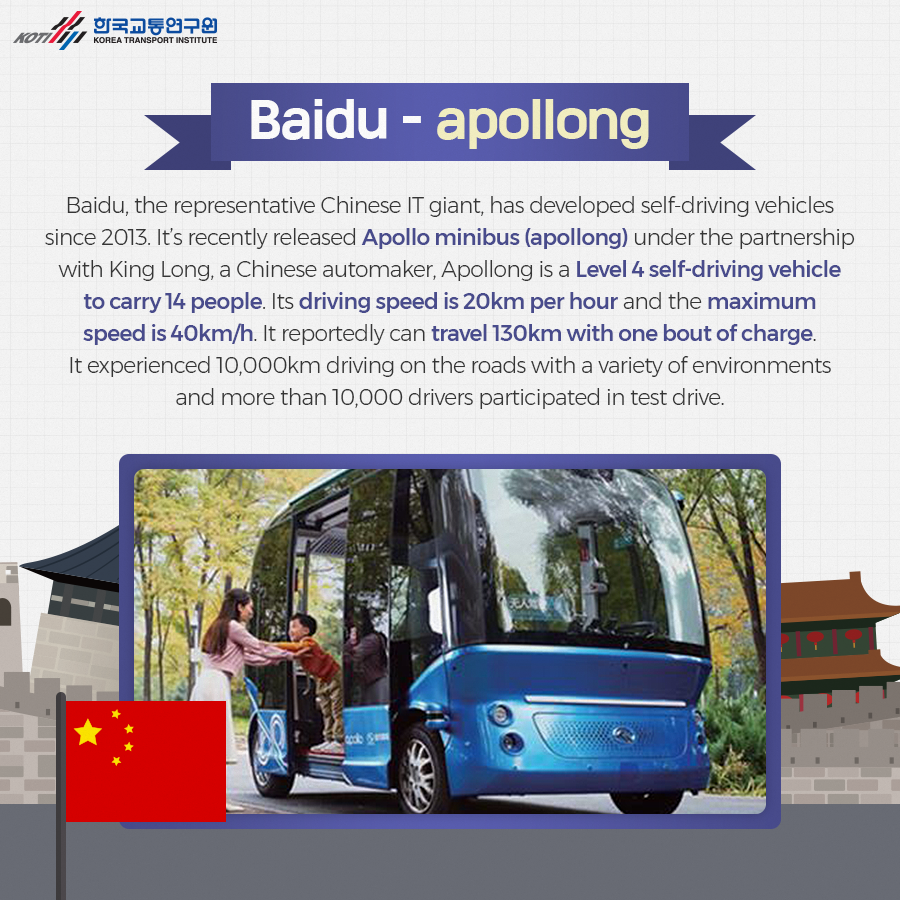 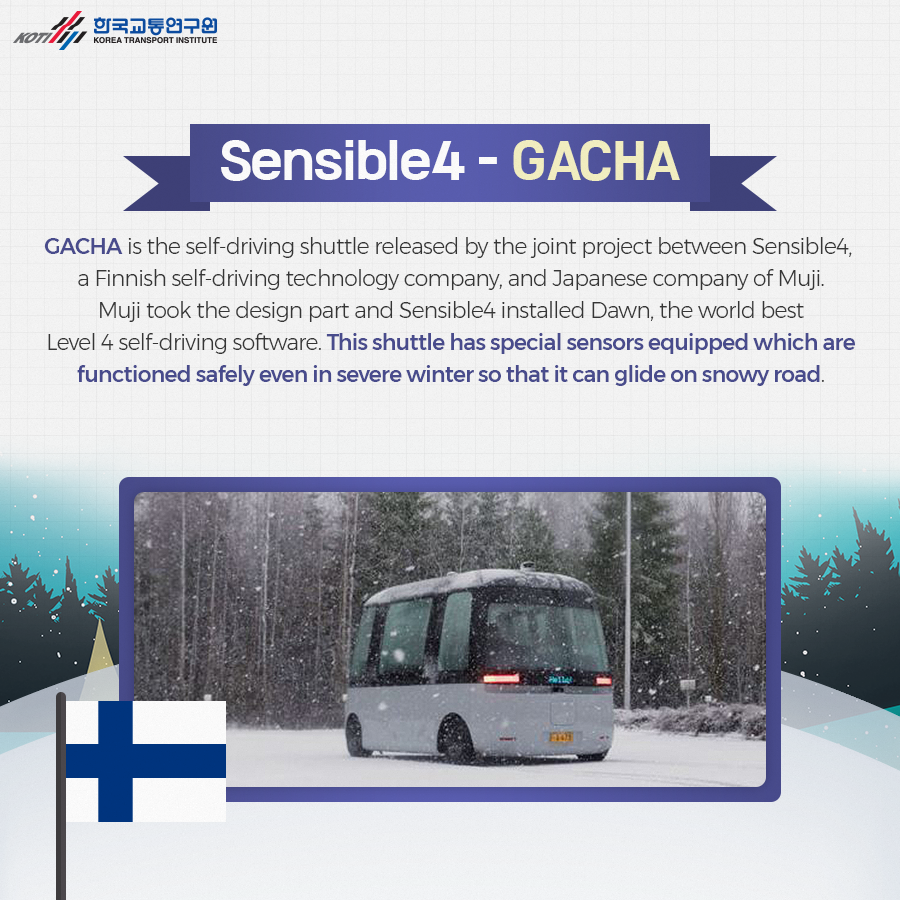 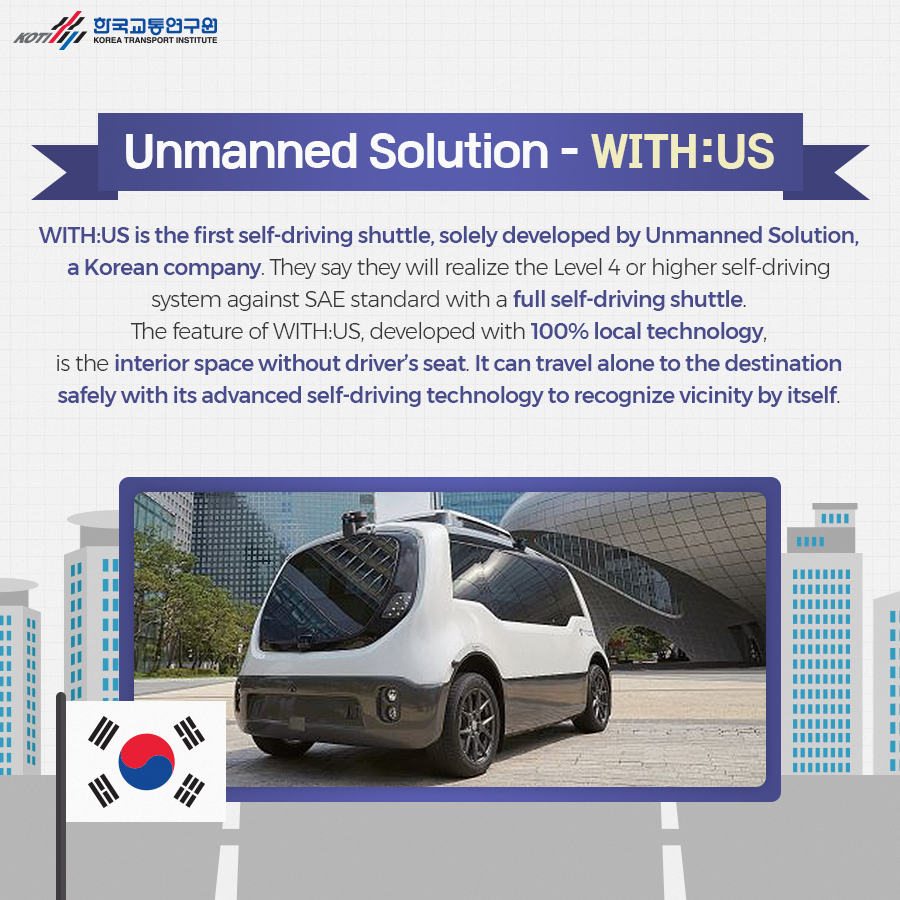 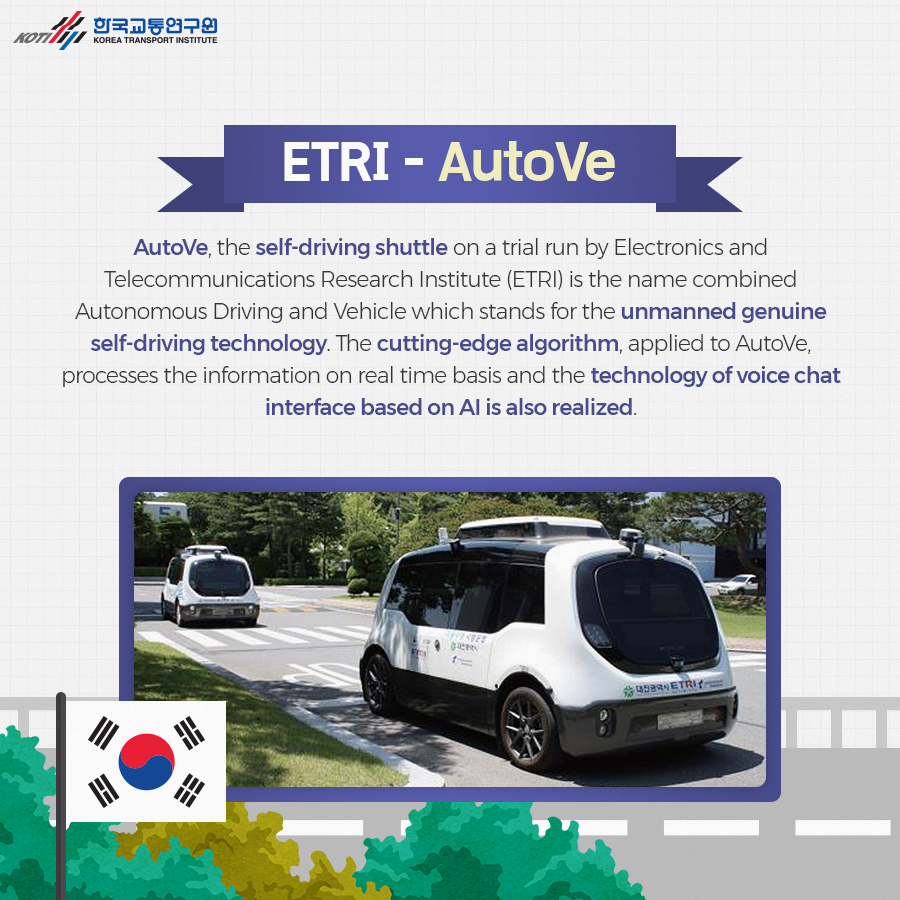 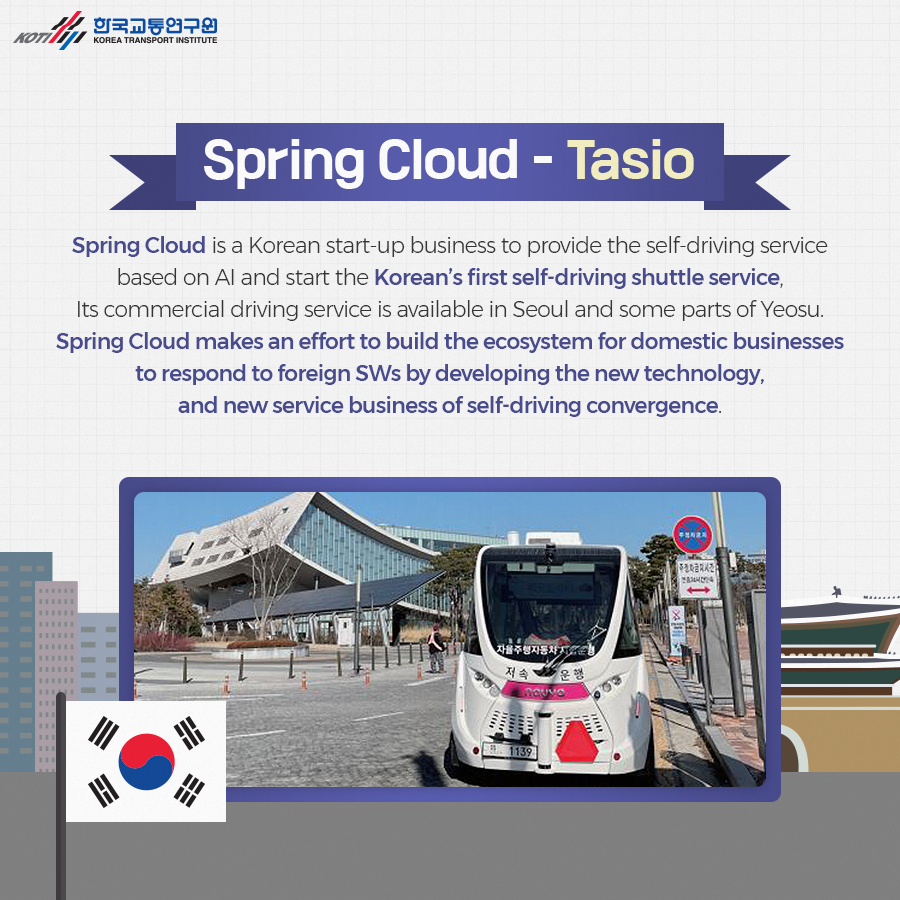 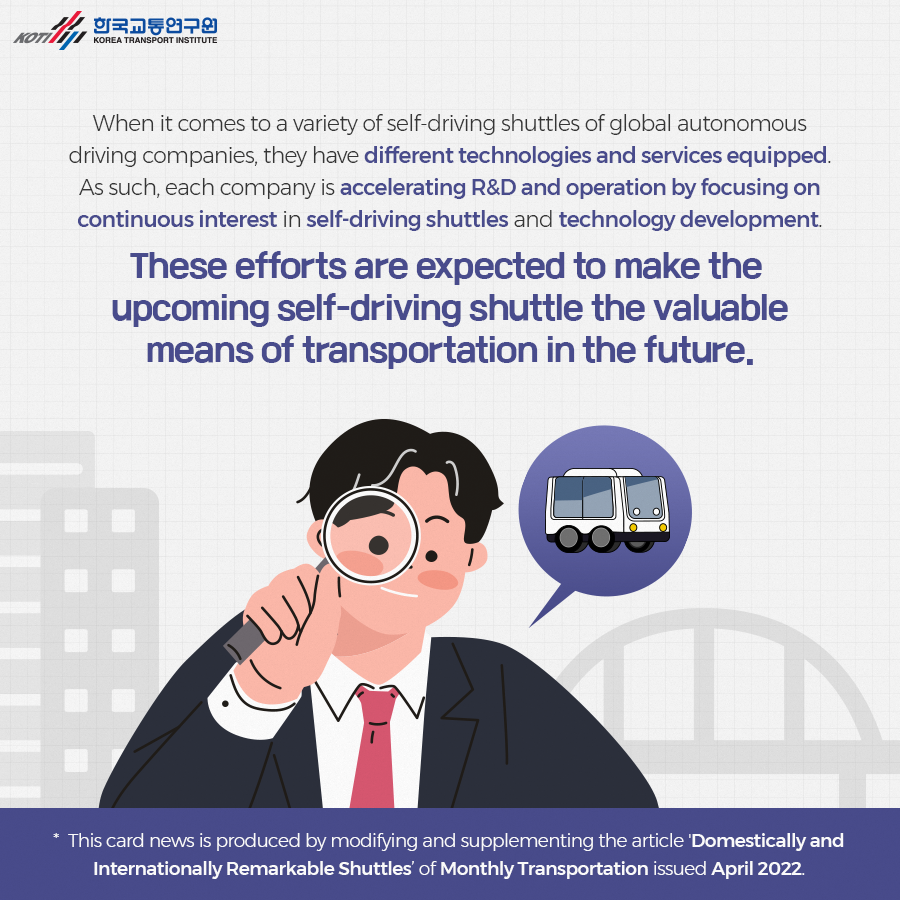 # Self-driving shuttle is one of the means of public transportation which is available for cooperative automated driving. They say it is highly likely to be commercialized due to its broader range of operation in autonomous driving technology than the one of self-driving vehicles. In this regards, many domestic and international start-up businesses strive for the development and commercialization of the service. Then, shall we look at what kind of self-driving shuttles are notable at home and abroad?

GRT (Group Rapid Transut), presented by 2getthere, a Dutch self-driving enterprise, is the autonomous driving vehicle without its driver’s seat but two-way sliding doors instead. It’s a type of minibus to travel along the designated routes with at with its speed up to 60km per hour. The beauty of GRT is high obstacle recognition rate so that it is reportedly to post about 90% of operational rate in bad weather.

EasyMie, the representative French self-driving technology company, introduced EZ10. It is a unmanned Level 4 Self-Driving vehicle, a 100% electric car and can carry up to 12 passengers. It has two types of operational modes; fixed routes or on-demand service. The company said its self-driving shuttle has 60% in global market share with highly recognized technology.

Baidu, the representative Chinese IT giant, has developed self-driving vehicles since 2013. It’s recently released Apollo minibus (apollong) under the partnership with King Long, a Chinese automaker,Apollong is a Level 4 self-driving vehicle to carry 14 people. Its driving speed is 20km per hour and the maximum speed is 40km/h. It reportedly can travel 130km with one bout of charge.  It experienced 10,000km driving on the roads with a variety of environments and more than 10,000 drivers participated in test drive.

GACHA is the self-driving shuttle released by the joint project between Sensible4, a Finnish self-driving technology company, and Japanese company of Muji. Muji took the design part and Sensible4 installed Dawn, the world best Level 4 self-driving software. This shuttle has special sensors equipped which are functioned safely even in severe winter so that it can glide on snowy road.

WITH:US is the first self-driving shuttle, solely developed by Unmanned Solution, a Korean company. They say they will realize the Level 4 or higher self-driving system against SAE standard with a full self-driving shuttle.  The feature of WITH:US, developed with 100% local technology, is the interior space without driver’s seat. It can travel alone to the destination safely with its advanced self-driving technology to recognize vicinity by itself.

AutoVe, the self-driving shuttle on a trial run by Electronics and Telecommunications Research Institute (ETRI) is the name combined Autonomous Driving and Vehicle which stands for the unmanned genuine self-driving technology. The cutting-edge algorithm, applied to AutoVe, processes the information on real time basis and the technology of voice chat interface based on AI is also realized.


* This card news is produced by modifying and supplementing the article 'Domestically and Internationally Remarkable Shuttles’ of Monthly Transportation issued April 2022.